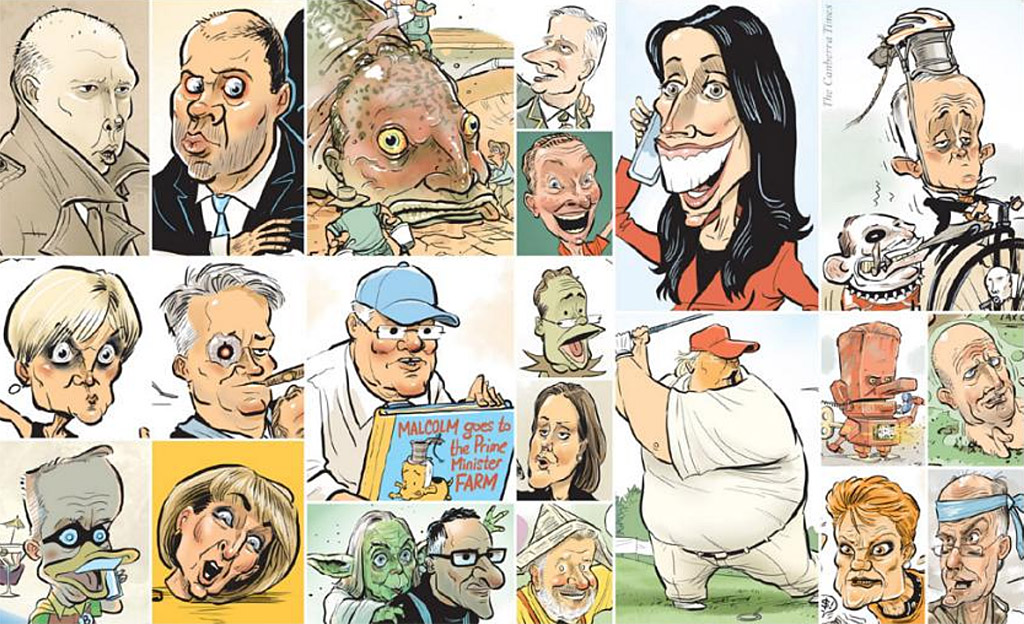 My colleague Sally Pryor has written a feature on my 10 years drawing cartoons for The Canberra Times. I selected some cartoons to illustrate it and wrote a few accompanying words.

Despite my tardiness updating this site, I am still drawing! I’m looking forward to seeing how many established caricatures we will get to retire at the upcoming Federal election. 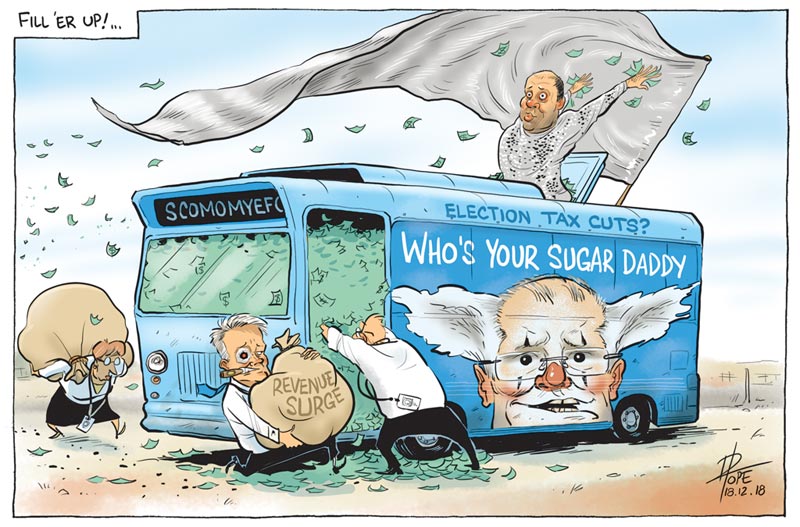 (The Canberra Times, 18 December 2018 | Gallery of most recent cartoons) 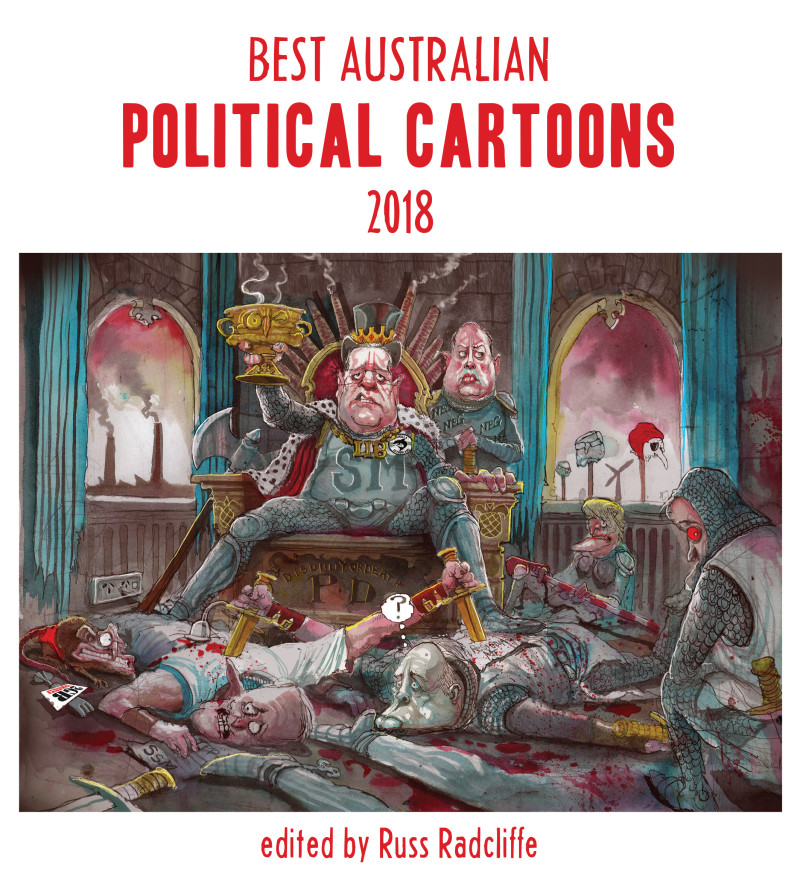 This is the 16th edition of Russ Radcliffe’s annual survey of Australian politics, as drawn by the nation’s cartoonists. Russ writes a handy introductory essay on the year that was, and includes a liberal helping of political quotes to accompany the collection of cartoons.

Available in all good bookshops etc, or via the publisher Scribe. 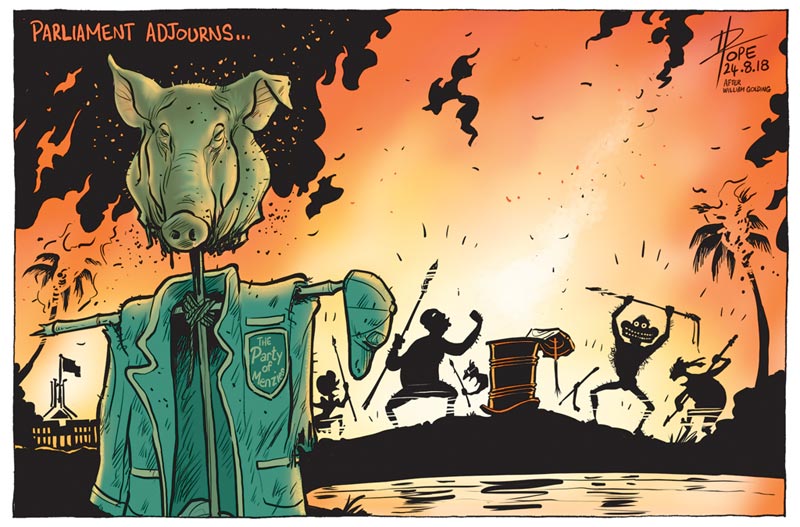 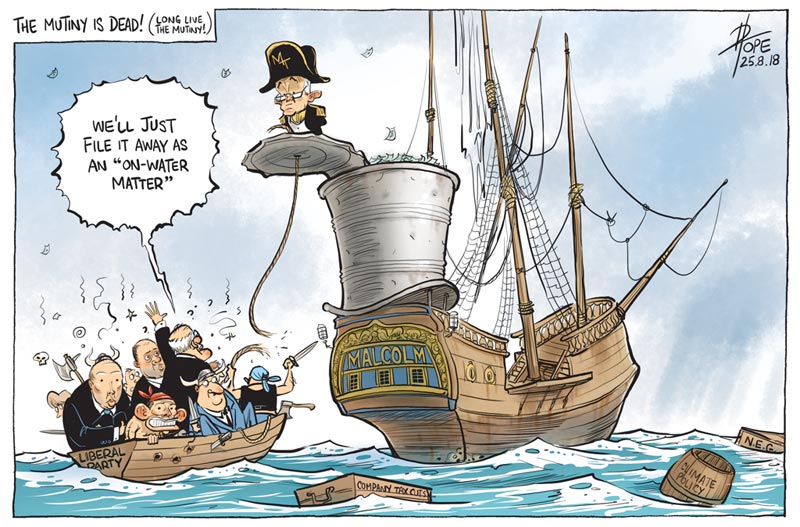 And one more, drawn after the anthology deadline, to complete a leadership triptych… 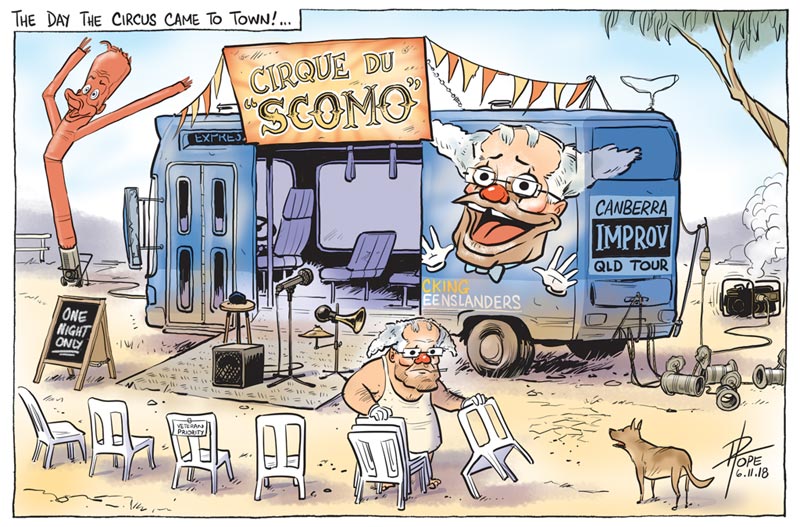 The Minister for Coal warned students that protesting for climate action would only lead to the dole queue.

Lecturing the next generation of Australian voters to ignore global warming really should be an express ticket to the back of that queue. Instead, it will probably lead to a lucrative minerals industry lobbying job. 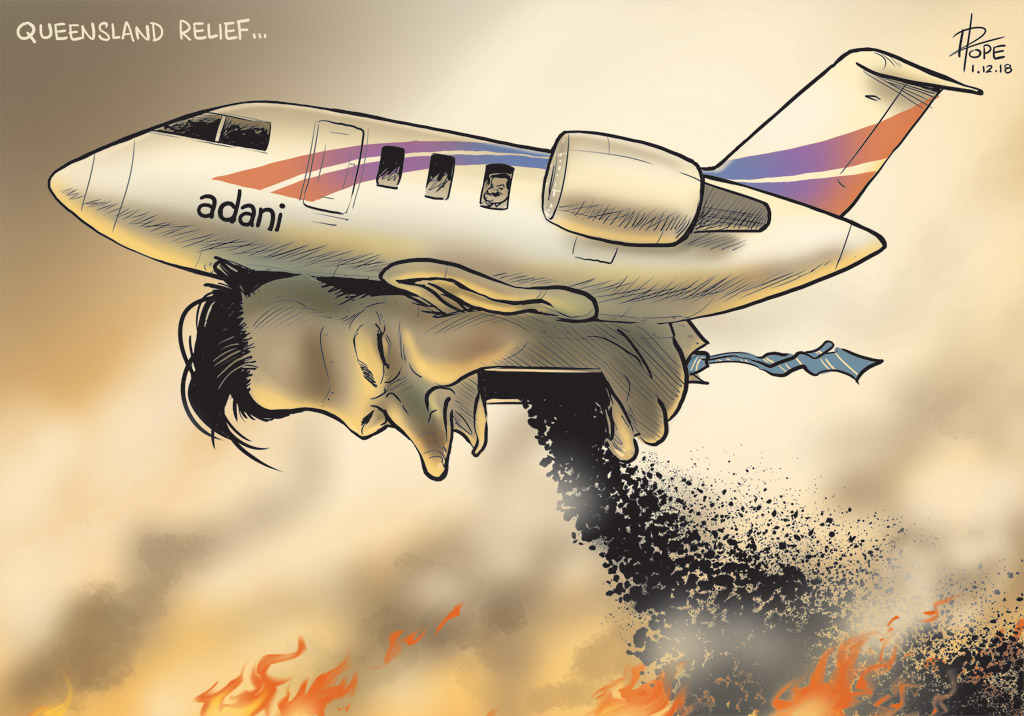 John Quiggin has written on where we’re at in the long struggle over Adani’s plans for a giant coal mine in Queensland.

(The Canberra Times, 1 December 2018 | Gallery of most recent cartoons) 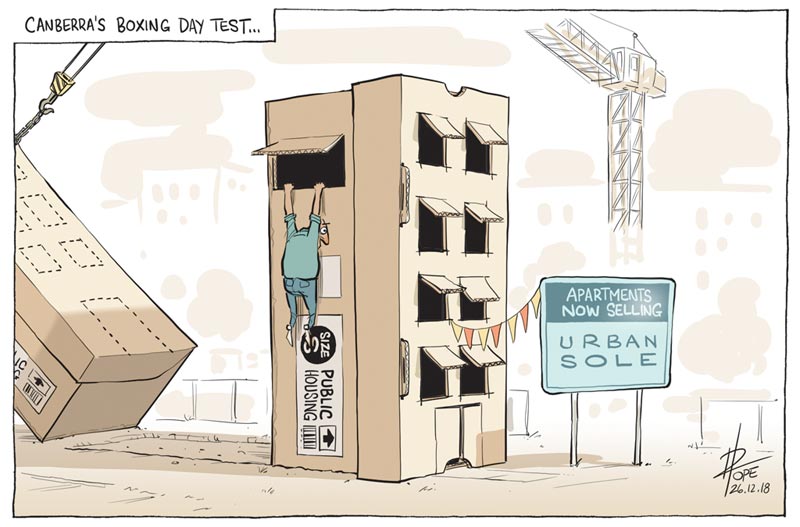 As apartment developments reshape the inner city, Canberra’s public housing has now fallen to 7.1 per cent of the capital’s total housing stock.

(The Canberra Times, 26 December 2018 | Gallery of most recent cartoons)

My sketch of the Prosecutor’s closing arguments in the retrial of David Eastman. My Canberra Times colleague Alexandra Back wrote the inside story of the trial. 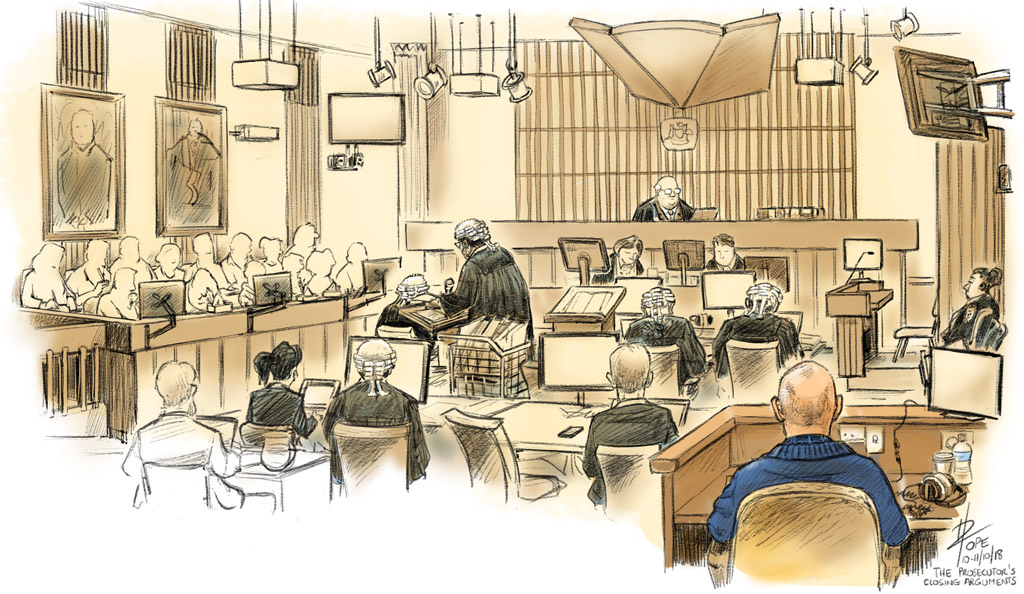 Eastman was originally tried and convicted of the murder of Australian Federal Police assistant commissioner Colin Winchester in 1995. He spent 19 years in prison before a judicial inquiry found he had not received a fair trial and quashed his conviction. Following a lengthy retrial in 2018, Eastman was found not guilty.

Courtroom sketching, like live caricature, are crafts unto themselves, so I was a little apprehensive in approaching this. I tried my best to ignore one of the more interesting visual elements in the room, the attentive jury, to preserve their anonymity, but I still had to remove some detail on advice from our lawyers.

This drawing actually records the very last day of ACT Supreme Courtroom One. Drab and windowless, and virtually unchanged since I was last in there 30 years ago, the courtroom was abandoned early on that last day as the buzzing from an old piece of tech in the room began to give one jury member a headache. The trial reconvened the following week in the new court building next door.

(The Canberra Times, 22 November 2018 | Gallery of most recent cartoons) 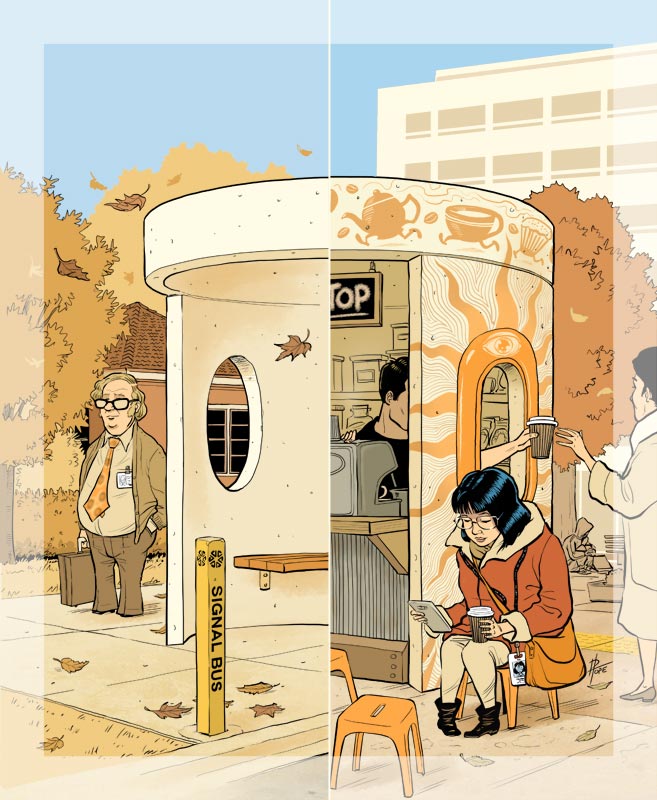 My Canberra Times colleague Markus Mannheim crunched the latest census data to test the stereotypes about those who live in the national capital.

Here’s my accompanying illustration for the front page, with initial concept sketches below, based on our city’s old concrete bunker bus shelters. 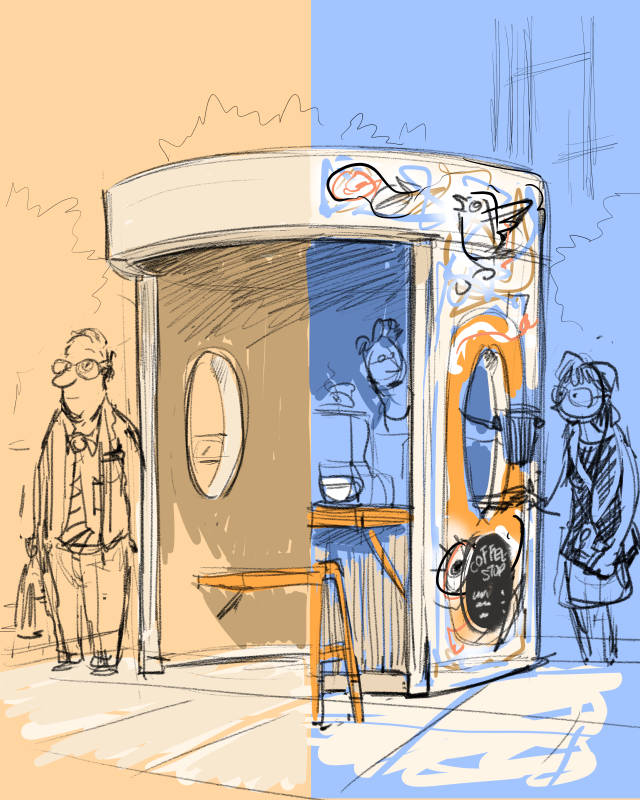 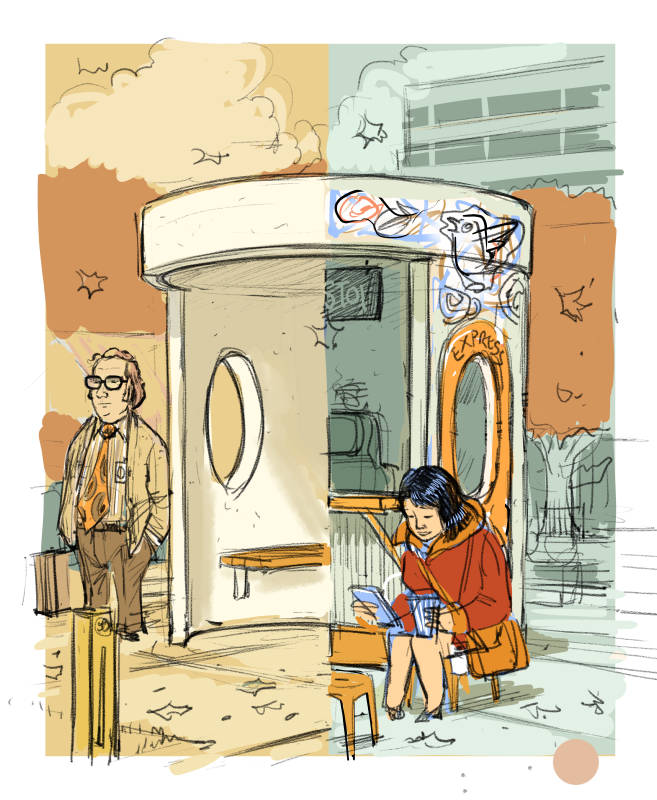